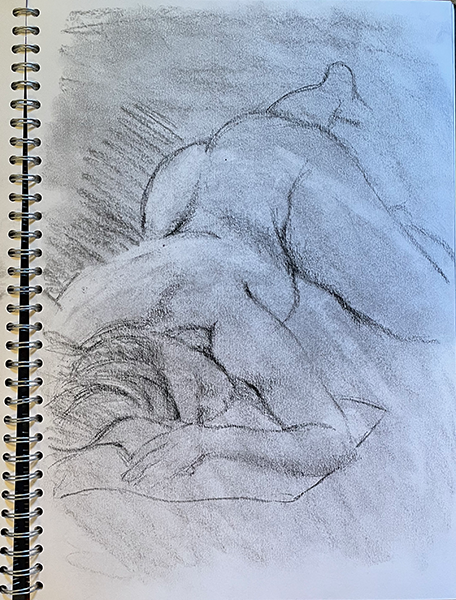 First return to life drawing for about 7 years with the Hay on Wye Life Drawing Group
21/09/2021
Yesterday evening, I finally got back to life drawing. The first time working on what used to be one of my favourite subjects since starting the BA at HCA (apart from one session set up for us by tutor, Celia Johnson).

The lack of continuity showed - I was horribly out of practice. A bit gutting when something that used to come easily didn't! Still, over the 3 hours of the session, the feel started - slowly - to return. It's a lovely group - one I had intended to join at the beginning of my course before realising that I was probably being overly optimistic about both finances and time! At that stage, the group met in the Clyro Village Hall, near Hay on Wye. When I got in touch this time (through a newspaper article about issues with nudity!), I was told that the group had moved to Hardwicke Hall on the other side of Hay, and that someone else was now running it. Although it is a longer drive for me than Clyro it was worth it! Hardwicke Hall turned out to be a beautiful building set off the road and next to an equally lovely church. While not seeming to be high up, the views from the hall are amazing, spanning almost 360°. It's obviously a well used and valued community asset with all sorts of interesting events taking place including a forthcoming pop-up pub! (Something I should suggest to raise funds for our hardly-used-at-all variety...)

Apart from Sarah, the new organiser, and Annie, the model, there were only 3 of us there, which was a nice gentle ease in. It was Helen's first session with the group too and also her first time doing life drawing for years, so nice to be in the same boat. Matt had been going regularly and his confidence was inspiring. I could tell he was a sculptor from his drawings, which were wonderfully loose and expressive, quite often executed with Oil Bars diluted with turps. A lovely effect and I hadn't seen oil bars used that way before. He really attacked his board which was in such resounding opposition to my tentative first attempts, the message was impossible to ignore. We started with quick (Yoga) poses, which was a good way to loosen up (us and Annie probably!), and then moved into longer poses. I discovered that covering the page of the sketch book I was using with charcoal and working into that with a rubber (must get a new putty rubber) before drawing onto it took away the white page syndrome and really helped me to respond more immediately to Annie. The best of these attempts can be seen here.

Next week will feel easier I think as I'll also be more confident about what materials to take with me and am determined to give it some welly!

It was wonderful to be back - I really enjoyed it and am already looking forward to the next session. I must give some thought to what medium I might use...