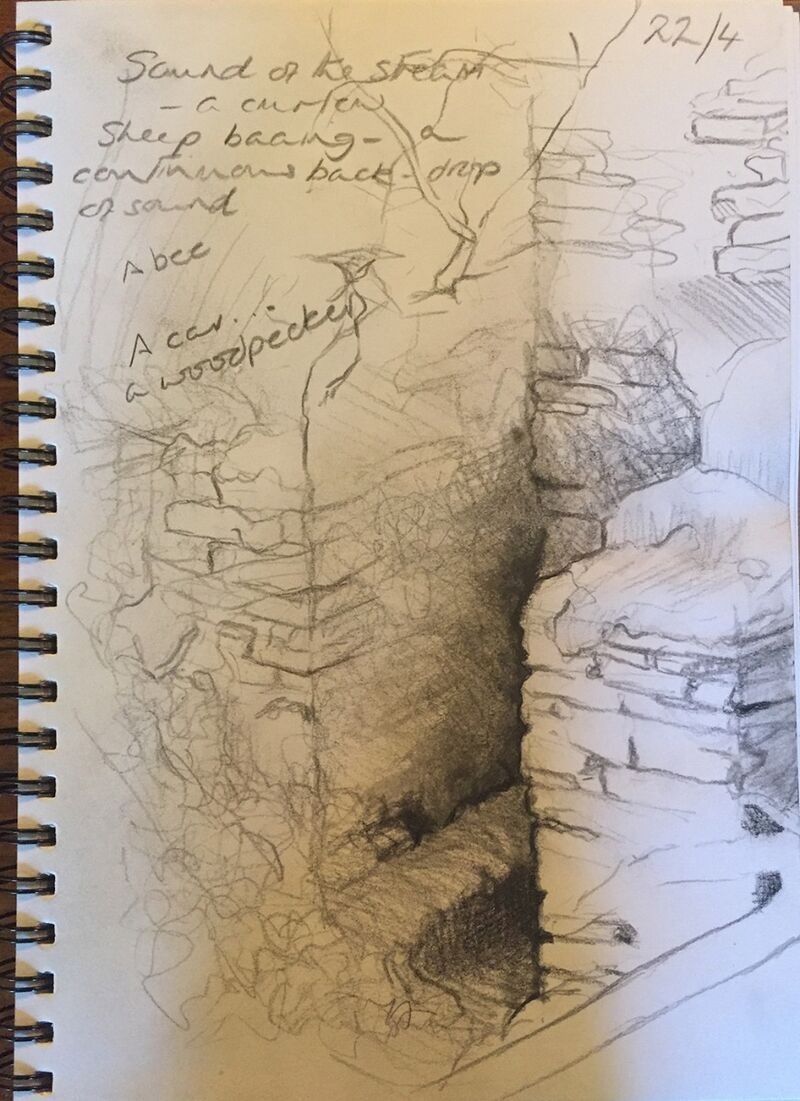 A retrospective look at the revised project for Module 2
09/07/2020
Covid-19 Lockdown, kicking in the morning I was due to have my first session at Rotherwas Recycling Centre to make a start on my project for the PG MPC (Practice Consolidation) Module forced a complete change of direction...

It took me a while to move on mentally, to extricate myself from the first project as I had been excited about it but one night after too long procrastinating, I was woken by an owl hooting right outside my window. Unable to get back to sleep, I started to think about aspects of my home environment: the wildlife; the sounds; the trees; the streams; the surrounding hills and countryside; the features of the landscape and I realised - finally - that I could use the lockdown to my advantage and make my village and immediate surroundings my external partner. Once I'd made this mental (and emotional) leap, I was freed from my own restrictions and could move on.

A bit of background: Glascwm is nestled in a valley in the Radnorshire Hills. It used to be a much larger settlement than it is now, with a population of around 500 in the days when the old drovers roads that still criss cross the hills around the village were in constant use. This previous occupation is evidenced by the many ruins of small dwellings and remains of old burial sites dotted around the hills. Unbelievably it boasted 4 public houses, now, with the population having dwindled to around 50 and the weekly bus cancelled, 1 would be welcome! It boasts a Grade 1 listed church, which reputedly occupies the site of a previous monastery destroyed during the dissolution.

I called the new project 'An Exploration of Home Environment During Self-Isolation - the global to the local'. In deference to the Coronavirus that had changed all our lives so unthinkably, I restricted myself to the government mile radius (although I found that there was ample interest in a far smaller area for the time I had) and started by heading out with my iPhone and sketching gear and walked a circular route from my home. I started filming in an ancient orchard behind the church, filming and recording as I walked. I chose to shoot in portrait which is the less-used option but, as most of our encounters with the world are upright, I wanted to give the viewer the feeling that they were walking with me. I found that walking with the intention of 'looking' created 'seeing' and elements of nature took on a new vibrancy. With the sounds of nature louder as a result of lockdown, accompanied by the calls of cuckoos, a curlew and the knocking of a woodpecker in the distance; the buzz and hum of numerous insects and bees; the ever-present background noise of running water, sheep and barking dogs, I walked as though in a lucid dream absorbing details previously unnoticed or taken for granted. I had never made or edited a film before and that undoubtedly showed in the end product but I was happy with parts of it which I felt did capture some of the peace I felt during that magical walk. I found both the filming and editing challenging but immensely satisfying and will be working on more. I called the film "Lockdown Meditations" as making it really felt like a walking meditation.

I took time to sit in a pine wood, bordered on 2 sides by a stream, to meditate and sketch part of the ruins of an old mill there. An hour of utter absorption. I forget sometimes how happy it makes me just to sit and sketch and how it brings me into such close contact with my surroundings. Like a poem, even the most 'unsuccessful' sketch can transport me instantly to the moment in time I created it complete with memories of smells, sounds, emotions intact.

I also took many photographs - it seemed as though there was a photograph everywhere I looked - and later made some large, A1 (the biggest size I can practically work on in my studio and.a reason to miss the big open wall space in our college studio), drawings/paintings.

The video can be accessed through the link: Lockdown Meditations